Type your search terms above and press return to see the search results.

I missed the start of the #64millionartists January challenge because I unplugged over Christmas. Which was lovely. But when I returned I saw that a good friend had taken up the challenge through her blog. There was quite a lot going on for me at the beginning of January. My health wasn’t great and the news from the doctor wasn’t entirely optimistic. I felt a real pull to take up the reins of the challenge but realised that my energy and focus were required elsewhere. I signed up, set up a rule on my emails to ping the challenges to a special folder and imagined I’d join in around the middle of January. Definitely by my birthday. Definitely. But the year didn’t turn out that way. The health news improved somewhat but the experience of being not well got worse. I got more run down before getting a diagnosis of Achalasia. And then there was lots of medical admin, and not feeling well and trying to juggle freelance work. And then after some treatment I started to feel better. Food is a wonderful thing and water is even better. But my confidence was pretty low and it looked like my focus would remain largely on returning to health for most of the year. And I wasn’t entirely happy about that. But still I didn’t start the challenge. I’m not working! I have loads of time! I’m a bit bored! I just couldn’t start.

This isn’t a new phenomenon for me. I have ideas, so, so many ideas but can never quite seem to let them out. I worry. About most things. About the usual being just plain rubbish. About not doing the ideas justice. About the purpose of art, and making art in the world I live in. About using my time to make change in the best way that I can. I could go on.

Then two things happened. I swapped my keyrings around. I added one a friend had given me to my house keys, it’s glow in the dark with a shiny bug in it. Ages ago I’d found this analogy of making art as making little contributions, like gorgeous little insects I could put in the world. I had loved the keyring and the intention behind it’s giving and wanted to keep it safe. But liberating it from a drawer to make it my everyday keyring put the idea of making my bugs, my contributions, into my head a few times a day. And that was a good thing.

I also went to an interview for a job that I wouldn’t have considered a year ago. I was excited by it but worried that I was playing it small, tying myself down, cutting myself off from making work. As part of the process I had to talk for 2 minutes about something I’m passionate about. And I told the story of Marguerite de la Rocque de Roberval. Which forms the basis of the resilience project. And I made the interviewer cry. Which turned out to be a good thing. Because I have the job. And I’m really excited about it on a lot of levels. I also remembered that I love telling stories and creating things.

I’m also really lucky to have an amazing bunch of friends. Many of whom are tackling big stuff, being bold and taking chances and making changes.

All those things conspired to be the kick up the arse that I needed. So. I’ve begun. I’m going to attempt to complete the challenge, creating something for the next 31 days in response to the #64millionartists January challenge.

The first challenge is – To celebrate the start of 2016 we’d like you to draw or make a picture of how you’d like your year to look. What are the highlights? Where will you go? What are you looking forward to? Use whatever materials you like.

As I write I realise I’ve gone totally off piste. Sort of. I knew that this was the first challenge (I know almost nothing of the others) and so I’ve been thinking about it a bit before actually starting. The last 16 months have been difficult health wise, with three conditions piling in on top of each other. Luck and our amazing NHS means that they are all manageable. Fatigue and feeling crap in various specific and unspecific ways mean that it’s not been the most fun. It’s not been all bad. I’ve learned lessons about slowing down, I’ve appreciated lots and lots of clouds and read some great books. I’ve also got a kick ass haircut that I like. However, thinking about the rest of 2016 I realised what I want most of all is no more doctors. No more chasing medical appointments. No more prescription admin. No more tests. So I made an art chart. Of an apple a day to keep the doctors away (apart from those days on which I know I have medical appointments). No offence doctors, you’ve been great. I suppose it’s a sort of talisman for the rest of the year. I sprinkled some bugs in there because I want to make art too. And I coloured in the year in yellow because I really enjoy the sunshine on my skin. I’d like a lot of that please. I really enjoyed making it, and got totally absorbed.

This evening I sat down and made my picture, and I noticed quite a lot of stuff happening while I did. So here’s a little list to remind me of what I discovered and how that might help for the rest of the challenge.

So the challenge is on. I’m not going to blog everyday but I am going to try to make everyday and if something interesting comes up I might just write about it here.

I know you’ve all been waiting for it. Here it is. An apple a day keeps the doctor away. 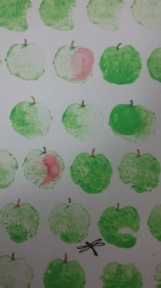 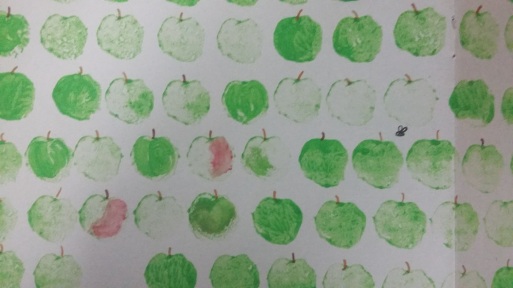